Although more than thirty years old, this article is a useful primer on linguistic and rhetorical theory with regards to architecture, making the central research question the following: how does architecture communicate and give meaning to its users and viewers through its perceived function and values?  To flesh out this question, the author discusses multiple theories within three sections—Architecture as Language, Architecture as Rhetoric, and Architecture as Movement and Fantasy—about how critics have defined and discussed architecture within a twentieth-century communications studies context.

First, Hattenhauer introduces Saussure and Barthes’ theories of semiotics and explains how this sign theory is built on such “oppositions as horizontal and vertical, dark and light, hot and cold” (p. 71).  The author applies this principle in particularly to architecture since viewing two or more constructed spaces allows for comparative analysis regarding architectural areas, such as line, size, or depth.  Additionally, semiotics, as they are rooted deeply within cultural systems, bring divergent meanings to signified architecture based on the connotations and denotations of the viewer.  Meaning is derived, then, from past cultural connotations, which inform and influence present values or beliefs. That said, semantic shifts can occur.  For instance, Hattenhauer cites how the tallest buildings were often considered the most sacred, but as modern architecture developed, this notion shifted; rather, tall buildings have become, instead, structures to be praised or celebrated.  Because of semantic shifts, critics may struggle with discovering the original meaning for the architecture, requiring, instead, difficult and often imperfect attempts to reconstruct earlier ethos and worldviews.

Beyond semiotics, Hattenhauer discusses architecture as rhetoric, and in this section, he most intriguingly theorizes that “not only [does] function follow meaning but also that form follows meaning” (p. 73).  The author gives the example, here, of faux beams or fireplaces in homes as “vestigial accouterments” even when function is gone. 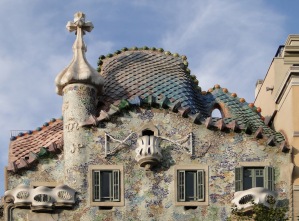 As far as form goes, Hattenhauer expounds on Gaudi’s 1906 Casa Batllo in Barcelona, with bony-like pillars and rail-less balconies with seeming eyes, to show how a form communicates multiple meanings. Still, the caveat is given “that architecture’s communications are not totally subjective and open-ended. Rather, architects can predict what behavior their designs will induce” (p. 73), from theme-based fast-food restaurants that encourage invented elements (e.g., a seafood restaurant that appears underwater), to mobile seating used for lectures and discussions, say, in an educational setting.  In fact, Hattenhauer argues that architecture can create practice and ritual.  It can change or affirm behavior based on one’s ethos or worldview.

With those two contrasting notions in mind—that architecture can have both an intentioned, objective meaning and a user-defined, subjective significance—Hattenhauer moves to another section of the article discussing architecture rhetorically by movement (i.e., the seemingly more objective meaning) and by fantasy analysis (i.e., the ostensibly more subjective meaning) and how the two intersect.  The author extensively teases out the architectural movement, dubbed International Style, and how it promotes the principle of functional form in Modern Architecture.  While this principle may be viewed as timeless and objective, Hattenhauer argues that it is merely imagined, and critics, especially those with rhetorical propensity, can find greater flexibility in the meaning of architecture through fantasy analysis, by which he means that “rhetorical criticism can be used to criticize not only the form but also the ideology of communications” (p. 76).

Implications of Hattenhauer’s theorization, here, offer vast contexts for understanding the meaning of buildings and spaces in general.  His semiotic applications toward architecture suggest the need for comparison among spaces; that is, no buildings or their accouterments can stand isolated in their meaning.  They have a borrowed meaning of sorts based on users’ previous experiences or pre-established beliefs or values.  In the object of study, for example, of a writing center, designers, in creating or recreating one, should seek to find what works well at other colleges or universities for this type of venue. Likewise, designers should provide design charrettes and build focus groups for those potential users of the writing center to gain ideas about their previous experiences and what preconceived ideas (e.g., levels of noise often are a point of difference in writing centers) the population may have.

Regarding the author’s theorization on the rhetoric of architecture, his views propose that architecture—and its elements—can afford or affirm symbol or custom for its users; however, it can also effect change in behavior. As such, designers of a writing center, for instance, might decide to place it in a library because of said building’s historical symbolism as a hub of knowledge, a knowledge that users might think intellectually diffuses to them simply by being in the space.  On the other hand, writing center designers might decide to include a new piece of technology, such as meeting and conference technology (see Media:Scape), to encourage a change in user behavior toward a more collaborative and innovative way of working.

Is a stately library the best environment for a writing center? (Source: Wikimedia)

Additionally, Hattenhauer’s theorization of fantasy analysis within architecture suggests a need for imagination and exploration, not just persisting with old notions of design, just for the sake of doing so. Rather, architecture—and its principles—can be reimagined and redefined within a new context. To exemplify, writing centers may historically project a formal, studious appearance, but simply because of an archetype—a movement of sorts—designers may reimagine a center atmosphere that’s more of a paper playground than a stately stereotype.

Overall, this article serves as a good background to my study.  Thinking about writing centers in semiotic and rhetorical terms affords value to their real and realized meaning as a learning and collaborative space.  To expand, I envision asking questions of students about their perceived meaning of the writing center and how the architecture of the space encourages or discourages certain behaviors.  Likewise, questions for staff, especially those who have been working in it since its inception, should include their imagined view of how they originally thought the writing center would look and operate versus their current view of how it looks and operates today.

One of the most poignant bits of utilizing rhetoric to understand the meaning of architecture (at least for me) is the identification and unraveling of emotion, of which a writing center certainly is not devoid, especially if we think of writing as a creative—and partially emotional and affective—act.  This sense of emotional design aligns with the work of Norman (2004) and especially his passage where he says, “[C]ognition interprets and understands the world around you, while emotions allow you to make quick decisions about it” (p. 13).  With such rapid-fire judgments through the affective domain, writing center designers should find it more incumbent on them than ever to be sure the first visual impression is a good one.