This article delves into the history and expectations of the atmosphere, arrangements, and accoutrements recommended for writing centers.  Discussing their historical ambiance, author Jackie McKinney points to past metaphors used to describe writing centers, such as “Andrea Lunsford’s garret, storehouse, and Burkean parlor; Elizabeth Boquet’s laundry or safe house; or Steven North’s skills center, fix-it shop, or cross between ‘Lourdes and hospice’” (p. 8).  McKinney says, however, that the most prominent description of writing centers has been toward a homelike setting. She gives examples of a number of writing center professionals who have argued for their spaces to appear in such abstract terms as welcoming, inviting, non-threatening, non-remedial, and non-classrooms.  To create such a mood, recommended furnishings and architecture in writing centers have included everything from couches, bean bags, lava lamps, coffee pots, posters, and plants, to soft carpet, calming colors, and a window to stare out.  Altogether, these items and the variously suggested designs and arrangements that create a homey feel in writing centers are a deliberate response to yesteryear’s “auto-tutorial writing labs” with their skill-and drill-sensibilities (cited in Boquet, 1999, p.51).  What is more, the homey metaphor plays into the whole idea of writing center staff being perceived as part of the family (cited in Carino, 1995, p. 20).  McKinney argues, however, that these descriptions of writing centers are more about ideal centers than an actual critical reading of how the space looks and feels.

With that in mind, the author turns to Nedra Reynolds 1998 article “Compositions Imagined Geographies.” In this work, Reynolds suggest that compositionists look at the material realities of the spaces in which students write, rather than looking through them. This call for a more critical reading of writing centers turns McKinney to ask more analytical questions about what moods these spaces actually exude. For instance, she writes, “[D]escribing a center as having a couch and softly painted walls may invoke the metaphor of home for some readers . . . [but] what if the couch is terribly stiff, the walls a dirty beige, and the center itself full of cranky tutors?” (p. 10).  Further, McKinney uses the work of Reynolds, who identifies Tim Cresswell’s principle of critical geography, which moves away from “geographic regions” to an analysis of the “role geographic forces has in the explanation of other things.”

In addition, the author contends that writing center professionals have to look at more than just space but also focus on objects in the space. She uses W. David Kingery’s work, here, to help flesh out the idea of cultural materialism and how reading geography and objects, although more difficult to read than text, will help staff better understand the privileged and relative space of a writing a center.  To exemplify, McKinney picks up on the works of Colleen Connolly and her colleagues and Leslie Hadfield and hers—“Ericka and the Fish Lamps” and “An Ideal Writing Center,” respectively—demonstrating how design choices within writing centers truly take on different meanings among administrators, staff, and students.

Interestingly enough, even in these different critical readings of writing centers, McKinney suggests that a sense of hominess ultimately still seems to exist.  As a result, in a full section, McKinney gives three admonitions regarding the idea of a homelike writing center: 1) comfortable is a way of “aligning with mainstream [and middle-class] values” (p. 16); 2) the home metaphor can be off-putting to students, as some homes are “dangerous or abusive” or “too loud or enticing” and students may be looking for an escape from such a setting (p. 16); and 3) homelike settings imply a gendered read, giving in to the stereotype of feminine nurture and the “director mother,” especially as writing centers have been predominantly directed by women over the years (p. 17).  As a caveat, McKinney is quick to point out that readers should not confuse this feminization with feminism. She cites bell hooks who “describes a different kind of feminist space—one that does not nurture but works because of confrontations and the exchange of ideas . . . “ (p. 18). McKinney concludes that the dominant metaphor of writing centers as homes has narrowed our gaze. Writing center professionals should, instead, look at their spaces and not through them.

Compared to my own research, McKinney contrasts with the work of architectural theorist Christopher Alexander, father of pattern language, who in his 1996 address to the Silicon Valley crowd (transcript available here), argues for living structure to sustain and nurture individuals as well as for objects and architecture to offer a “condition of wholeness” when individuals move into their presence.  On the other hand, McKinney’s view reminds me of Pratt’s work on contact zones back in the 1990s, but McKinney never really explains how architecture and objects might dictate such contact or conflict. She only rails against the lack of difference, so to speak, in writing centers, and like Joe Harris (1995) warns regarding Pratt’s theory when put into practice, a “multicultural bazaar”(p.33) may be all that a writing center ends up becoming if McKinney’s notion is not carefully put into practice.

In context within the course, McKinney’s article reminds me of the work on material rhetoric by Propen (2012), especially her discussion on Foucault’s heterotopias that “asks that we take a look at the hierarchic ‘history of space’ . . . to expose the different relationships that delineate them” (p. 29).  Further, Propen points out how Foucault calls for knowledge in unfamiliar spaces (p. 31). With these Foucauldian ideas in mind, perhaps another way of looking at McKinney’s work, here, on writing centers is not necessarily to see the space as merely aiming to produce conflicting ideas for its users but as a space striving to produce something different than the norm for all of its users. One user may prefer a homelike setting; another may choose a more collaborative, debate-like setting. How do writing center professionals accommodate for these differences all in one space? A versatile architect, both real and metaphorical, is needed.

Propen, A. (2012). Locating visual-material rhetorics: The map, the mill, and the GPS. Anderson: Parlor Press. 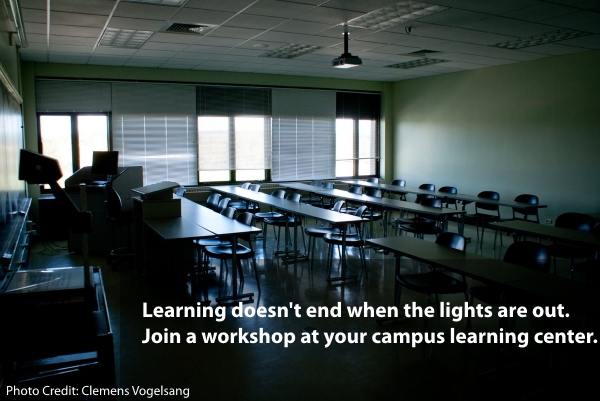 This is more of an advertisement than a sign, but it promotes out-of-class workshops in our learning centers, which dovetails with my project on writing centers. The photo was borrowed (and cited as necessary by its creator) from Flickr; it is cropped at the left as the overhead projector took up more space in the original.  Interestingly, the room looks just like one of our campus classrooms.  The font is Myriad Pro, and it is the one recommended by the marketing department’s style guide at the college.  The white aims to stand out against the dark background.  The photo credit (hopefully) is small enough not to detract from the photo as a whole yet gives the required attribution.

My digital life may have begun as a kid in the 1970s in attempting to draw cartoons (and doing it poorly) from step-by-step books found at the library. The 1980s popularized the Atari 2600, and I remember my fingers nearly … END_OF_DOCUMENT_TOKEN_TO_BE_REPLACED