Thesis:  Writing center design should encompass multiple and diverse spaces to accommodate the personal preferences and writerly contexts of the student; however, the writing center staff should serve as guides to helping students gain the most meaning from the space … END_OF_DOCUMENT_TOKEN_TO_BE_REPLACED

One of my favorite movies, Hitchock’s The Man Who Knew Too Much (1956), starring Jimmy Stewart and Doris Day, tells a story about their son being kidnapped, which later leads to the unraveling of a greater plot to assassinate the prime minister of England. This scene, seen below, is of Jo and Ben McKenna (Day and Stewart, respectively) talking to their son’s kidnappers – and eventually their son — on the phone. 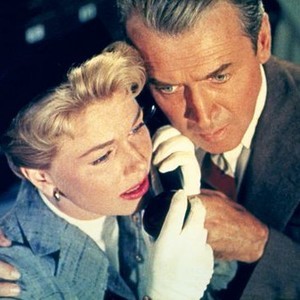 The scene is interesting as the camera does not shoot straight on; rather, its angle tilts slightly upward, creating an ominous effect. The camera itself creates a position of authority, making viewers look at the couple’s powerlessness regarding the situation.  However, stepping back a bit, it is not only the camera that lends its power, but it is also the modern movie theater with its screen and images, displayed through lenses and angles, that create a modern Panopticon of sorts, allowing hundreds of eyes — remember, Panoptes is the many-eyed giant of Greek myth — to engage in voyeuristic behavior all at once.  As Foucault warns, “Visibility is a trap!”

Deconstructing the image a little more, we see that the McKennas wrinkled and worried foreheads take up the greater portion of the image. Their own gaze is nebulous, since the situation does not warrant visual focus but more of an aural one (the aural gaze, by the way, is another element to consider within a different context, especially since the song “Que Sera, Sera” plays so prominently in this film), as they await directions from their son’s kidnappers down the telephone line.  That said, viewers can tell that Jo is almost teary eyed, and Ben’s eyes show worry or maybe even the machinations of revenge. If “seeing comes before words,” as John Berger argues, then it takes little examination of the scene – few if any words at all — to note the grave concern on the McKennas’ faces.

Speaking of their faces, the lighting in this scene could be construed as one that depicts a sense of feminine submission, as Ben’s face possesses all of the color, while Jo’s is pale and perhaps symbolically her strength pales in comparison to Ben’s.  The traditional 1950s ideal of a man as the head of household and the more analytical gender play out here. Additionally, Ben’s profession as a physician lends to his authority over he wife, as, in one part of the film, he sedates her to help calm her down.  Ironically, however, it is the emotion of the song sung by Jo that helps them rescue their kidnapped son.

Altogether, it is both the power and authority of the visual, both conscious and subconscious, that move our society to think and to act (I think here of the recent news that images of deceased infants moved our current president to retaliate against Syria’s Assad).  As a derivative, film brings the visual to a new level because of its ability to not only depict a single image but also a moving narrative. When placed within a theatrical context, it makes me wonder if the idea of physical discipline, as seen in ancient Roman arenas (a theatrical spectacle of their time), differs much than the mental discipline of the modern movie theater.

Alexander, C. (1996). The origins of pattern theory, the future of the theory, and the generation of a living world. Speech presented at Keynote Speech to the 1996 OOPSLA Convention, San Jose, CA. Retrieved from http://www.patternlanguage.com/archive/ieee.html 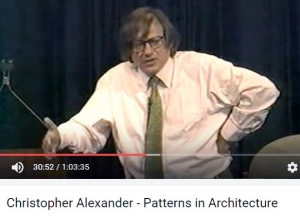 Scholar and practitioner Christopher Alexander has produced theory about architectural and space design since the 1960s. His most well-known theory is pattern language, originating from a 1977 text co-authored with colleagues from the Center for Environmental Structure, an organization in Berkeley, CA, that Alexander founded and led. In this text — a transcript of a keynote speech (available on YouTube) given at the 1996 ACM Conference on Object-Oriented Programs, Systems, Languages and Applications (OOPSLA) — Alexander not only explicates pattern language and theory, but he also discusses the nature of order and generation of a living world, each of which is, or has become since this speech, a subject on which Alexander has considerably expanded in his publications (see NPR interview; Nature of Order). This speech compactly combines the highlights of much of Alexander’s intellectual work into one place, and that is why I selected it for this entry. Alexander’s connections to software design, on the other hand, while meaningful, play little into the reason for my selection, and, therefore, the summary does not delve into such application.

Beginning with pattern language, Alexander argues that this theory is intended to promote “physical structures that make the environment nurturing for human beings” and, on a large scale, creates a genetically and locally adapted approach to a “living structure.” Fundamental to pattern theory, however, is the idea that townships and structures in general were historically created by the people and for the people. Pattern theory, then, attempts a reversion in design, so that a network of living structure is created “in a fashion which could be in everybody’s hands, so that the whole thing would effectively then generate itself.”  Incidentally, readers of the original text, A Pattern Language, can see this idea fleshed out with the 253 patterns Alexander provides to empower readers to form their own language of living spaces through sequences of these patterns.

Some of the fascinating pieces of pattern theory that Alexander points out in this speech is that it possesses “a moral component,” aims to create “morphological coherence in the things which are made with it,” and generates coherent, morally sound objects, focusing on the created whole. Comparatively, pattern theory, as of course it is Alexander’s wrestling with a language, shares some properties with rhetorical theory, especially as previously discussed in Hattenhauer’s article on the rhetoric and semiotics of space design.  For instance, both Alexander and Hattenhauer (1984), to use the words of the latter author, see “that architecture’s communications are not totally subjective and open-ended. Rather, architects can predict what behavior their designs will induce” (p. 73).  That said, however, greater differences appear between Alexander and Hattenhauer’s languages of space than similarities.  For example, when discussing ethos, as related to architecture, Hattenhauer places the weight on observers, saying that it is their ethos or worldviews that give space meaning; however, Alexander imparts an inherent ethos on architecture, giving it a moral quality itself, outside of an anthropological or sociological viewpoint (i.e., that of the observer or user).

Additionally, Hattenhauer and Alexander differ in their notions of generation and coherence. Again, this contrast has more to do with where the weight of architectural meaning is distributed. Generation for Hattenhauer happens through observer or user exploration, fantasy, or imagination; but for Alexander it borrows more from the pattern itself, rather than from the user experience (i.e., Alexander has created empirical studies which he later narrows down to 15 properties that lead to creating a nurturing environment, and while those studies come from investigating human behavior and expectation, the meaning becomes more objective than subjective). Likewise, this idea of morphological coherence, or coherence in general, for Hattenhauer is, to borrow from media studies theory, more rhizomatic than rooted. Alexander, on the other hand, sees coherence as the most conclusive evidence of creating a successful pattern theory (and structure).  As Alexander points out, one can use good ideas to put together a structure, and those ideas will result in a “few fragmentary structural ideas,” but they will not create a coherent and well-formed structure. Speaking of which, Alexander seems rather fastidious about coherence, and he remarks how although builders began to use his patterns in the late 1970s and early 1980s, they still were not producing coherent design, so that is what led him to work on the nature of order, the second part of his career (and his speech).

Regarding this order, Alexander notes:

. . . I began to notice a deeper level of structure and a small number (fifteen) of geometric properties that appeared to exist recursively in space whenever buildings had life. These fifteen properties seemed to define a more fundamental kind of stuff; similar to the patterns we had defined earlier, but more condensed, more essential—some kind of stuff that all good patterns were made of.

Alexander sees these 15 geometric properties as the “substrate of all patterns.” Moreover, he argues the existence of an objectivity regarding architecture’s coherence and, more specifically, his arrival on these fundamental properties, as they are based on studies that measure the “profound feeling of wholeness” a user experiences with specific designs. 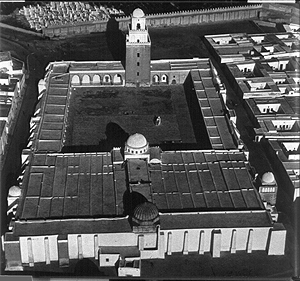 Centers are important! A strong center, as the courtyard depicts in this photo, is one of Alexander’s 15 fundamental properties. He also refers to the properties as centers. (Photo: Living Neighborhoods)

Although 15 different properties, Alexander notes that they all are rooted in “a recursive structure based on repeated appearances of a single type of entity—the primitive element of all wholeness.” He calls these entities “centers.” He says, “Centers have life, or not, in different degree, according to the degree that the centers are built from other centers using the fifteen geometric relationships which I have identified.”

Interestingly, Alexander’s thinking here on the nature of order within architectural design draws some parallels to the suggestions Sojna Foss lays out in her chapter “Theory of Visual Rhetoric” in the Handbook of Visual Communication (2005).  For instance, Foss suggests two applications for investigating the visual image: a deductive application of the rhetorical to the visual (pp. 147-48) and an inductive exploration of the visual to the rhetorical (pp. 149-50). The deductive method uses rhetorical theory to guide them through the meaning of the artifact, looking, for example, for its pathetic, mythic, or epideictic nature.  The other more inductive method arrives at rhetorical theory based on the image’s qualities.  One might argue that Alexander has taken the more inductive route, creating a language — a rhetoric of sorts — around the architectural artifacts.

To round out his speech, Alexander discusses the “generativity problem” with architecture and what might be done about it.  He cites a statistic that all “built stuff” along with exterior and outdoor space equates to about 10 to the 14th square feet (at least it was in 1996).  Alexander follows up by asking, “How do we create, or generate, living order in 10 to the 14th square feet of construction?” His response:

. . . [B]oth A Pattern Language and The Timeless Way Of Building [the work that preceded A Pattern Language] say that the pattern language is to be used sequentially. In practice, however, this feature dropped out of site, and was not emphasized in use. [. . . ] In our most recent work, that has changed. We are now focusing on pattern languages which are truly generative. That means, they are sequences of instructions which allow a person to make a complete, coherent building, by following the steps of the generative scheme.

All that said, Alexander realizes he has made little mark on the world of architecture and space at 10 to the 14th square feet, even after 25-30 years of building.  In turn — and here’s where I will mention the audience — Alexander asks for the programmers in the room to join him in creating a “natural genetic infrastructure of a living world.”

What do I pull away from Alexander’s work for my project?  I think his work allows me to consider some key questions about writing centers:

Overall, Alexander’s oeuvre may contain some seemingly utopian ideals, but the fact that he has performed empirical studies over the years speaks to the viability of his theories, and they offer excitement about application to writing centers.